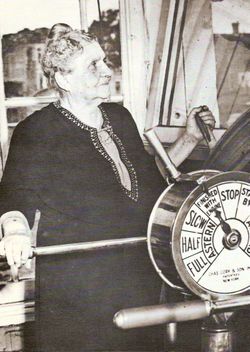 Mrs. Mary Miller, wife of Captain George Miller, became the first woman licensed to command a steam vessel, in 1884.  She had been acting master of the steamboat Saline unofficially for some time.

She had some competition in this vessel revolution.  Several women captains and pilots worked the western rivers around the turn of the 20th century. One of the most famous was Captain Mary B. Greene (pictured above).  A captain for almost 60 years, “Ma” Greene earned a masters license for all rivers leading to the Gulf of Mexico and pilotage on the Ohio River.  Her last command was on the Delta Queen for one year preceding her death in 1949.  Rumors had it that her spirit haunted the boat for a while as she refused to allow alcohol aboard the boat, and the owners built a bar for the guests after her death