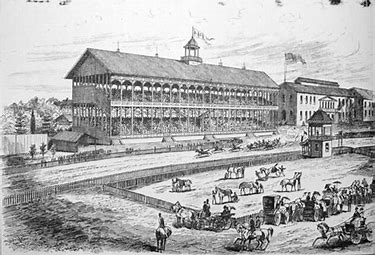 Steamboat Races were popular in the 1800's and that need for speed was carried over to land events in New Orleans.  As early of 1839 Bernard de Marigny, Julius Branch and Henry Augustine Tayloe, organized races at the "Louisiana Race Course" laid out on Gentilly Road, making it the second oldest site of horseracing in America still in operation.  On March 20, 1839 the highest purse at the opening races was $1500, and extraordinary amount in the mid 1800's.  In 1863 the course was renamed the Fair Grounds Race Course, which still features a race season as well as being home to the New Orleans Jazz and Heritage Festival.