Beast of a Cocktail

"Beast of a Cocktail"...Did that grab your attention? 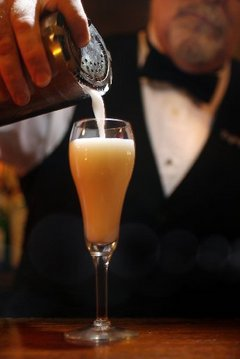 Greg H., our Gray Line General Manager, reflects on a family claim to fame. His great-great Uncle, Henry Charles Ramos, created the famous Ramos Gin Fizz cocktail. Following a trail of cocktail Joints in Birmingham and Baton Rouge, Uncle Charles opened a bar called the Imperial Cabinet Saloon, and was “recognized as the most famous mixologist of the South” (a mention in the 1895 New Orleans Times-Democrat). But he may have drifted into obscurity if it were not for his contribution of one of the greatest and most physically demanding cocktails) ever created. First unveiled in a frothy cloak in 1880, his New Orleans Fizz (as it was first called) was an instant hit at the Imperial. By 1919, and after moving to new saloon, The Stag, Henry C. Ramos and his Ramos Gin Fizz were legends. Want to know more? Want his recipe...and the detailed instructions? Watch the Gray Line Blog for more of the story to come. Be sure to Take the New Orleans Craft Cocktail Tour with Gray Line.